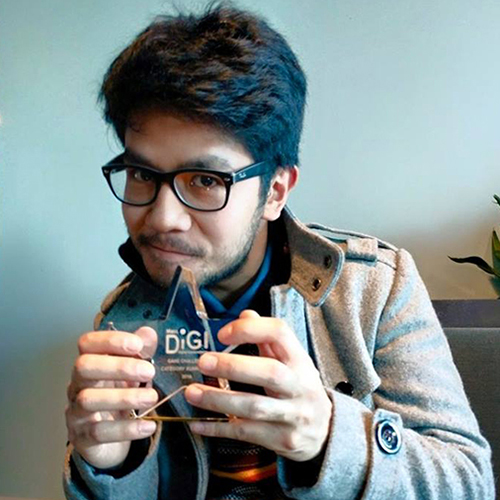 I’m the trickster of the group. I like to keep everyone on their toes, but I also do development and design work.

I graduated from Becker with a bachelors in interactive entertainment. I live in Worcester/Springfield currently, but I’m originally from Manila, Philippines (this my 19th year anniversary here, actually).

Tennis. I also like to sing and play instruments — guitar, ukulele, melodica, and most recently a kalimba.

Question #4) What’s a fond memory you have of the first year of petricore?

When the first game we made as a company (Mind the Arrow) launched, it was featured on the app store. I remember hanging out with some of the SIP people (folks who worked at the MassDigi Summer Innovation Program 2015) at a mall after work. We visited an apple store to see that the game was live and was being shown on the landing page. That whole week, it was fun to watch the numbers go up as more people played the game. 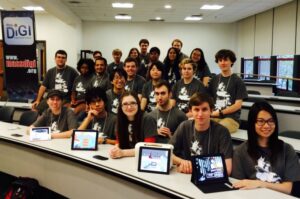 The members of SIP 2015, can you spot Oliver, Spav and Ryan?

Question #6) I’ve heard conflicting accounts of how Mind the Arrow came to be, but they all agree that you made it somehow or another. What’s your recollection of the events?

It was our second meeting as a company, and we were deciding what types of things we would want to work on. I brought the game idea as a PowerPoint where I made a really scripted version of the game to get the point across (clicking on the specific portions of each slide to make it seem like I was playing). About a week later, I came back from a tennis match, and for some reason I decided to just jam out a prototype.

The bulk of the game was developed abroad since I went to the Philippines the first month we started work as a company. I made some of it on the plane and some of it back home. I think the conflicting stories are because of each of these instances — from the pitch, to the prototype, and then the actual game itself.

Question #7) Do you have any hidden talents we might not know about?

I think I’m a pretty decent cook, but that’s less of a talent and more of a survival skill.

D. Va, Oliver’s favorite Overwatch character, but not when she’s bad in the meta

Persona 4, The World Ends With You, Breath of the Wild, Overwatch.

The first game I ever owned was Pokémon Yellow. A family member abroad sent me that alongside a Gameboy Color and a guidebook. I think we also had a Polystation (knock-off PlayStation

that played pre-loaded NES games). I have really fond memories of playing games with my cousins and friends, so I guess I took that nostalgic feeling and just ran with it as a career path.

Question #10) If you could eat any dessert while watching any movie, what would they be?

Question #11) A mad scientist tells you that for the rest of your life, everything will seem like it has the same texture, but you get to choose what that texture is. What do you choose?

Question #12) Years from now game design students all study a game that you’ve made. What do they study about it? What was great about the game?

I imagine it’d be a really successful title, and the topic would be: “What not to do in game development.” What’s amazing about it is how well it would’ve done despite all of that.