This week I got to interview our junior software developer, Ezra Szanton!

I’m a Junior Software Developer so I work in Unity on client and internal projects. I also help run the Twitter account, and I’ve designed a couple of games that are in the works.

Question #2) Where are you from, and where do you go to school?

I’m from Baltimore, and depending on how you look at it I either went to school at Tufts, or I’m in-school at Tufts (I’m currently taking a gap year). My major is Computer Science, unsurprisingly.

I like playing tabletop role playing games like D&D and Dread, I also play a lot of video games. Recently I’ve been listening to some podcasts and getting into collaging.

Question #4) You’re at the zoo, what animals are you first going to go see?

I’m going to go visit the big cats first, I feel like that’s one of the main things I wouldn’t be able to see outside a zoo.

If I could go back in time, I’d probably learn more about Music and pursue that. The patterns in music theory really appeal to me but I wasn’t motivated or naturally talented enough to get past memorizing songs for the piano when I learned as a kid. 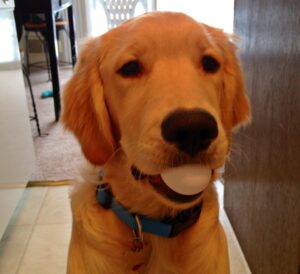 Ezra refused to provide video evidence of this, so we’ve included this artists interpretation

Question #6) What’s a hidden talent or hobby you have that people might not know about?

I can peel a boiled egg with just my mouth. It’s really gross.

Question #7) Ryan becomes independently wealthy overnight and tells you you’re free to make any game you want at Petricore fully-funded, what are you going to make?

I would want to make a game a week for a year, and then choose which one to make from there. Any game idea that comes straight from my head tends to have a lot of problems and I have a lot more luck starting with an observation about a game that already (partially at least) exists. If I made 52 games there would have to be some good nugget of gameplay in there to make a compelling game around. I’ve been really enjoying making horror games recently though, so I might lean in that direction. 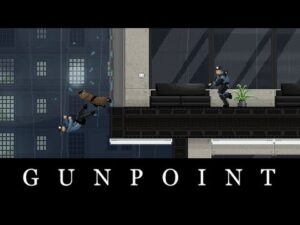 Spelunky 2, Nuclear Throne and Don’t Starve Together are all high on the list, but Gunpoint is my all-time favorite.

The first time I thought I might want to be a programmer was in high school, when I learned about random numbers built a randomized tree generator in code. I learned I could put that into a loop and it turned the tree into a forest. That was a really cool moment for me. I also watched a lot of GDC talks on YouTube, and realized that’s probably not something that normal people would do if they didn’t want to start making games.

The catalyst for me to start actually making games was when I worked at a summer camp one year, and had no access to computers there. I spent the whole summer thinking about games I wanted to make and as soon as I got home I made my first game in Unity. That game was terrible but I kept making them and they slowly got better (I think they did anyway).

Question #10) You’re at a fancy restaurant, everything is very expensive and fancy. Did I mention it’s fancy? What are you ordering to eat?

I would feel very uncomfortable there and probably ask the waiter what they recommend. 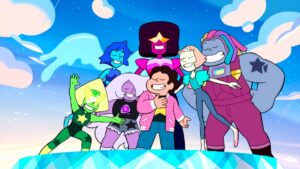 (some of) the characters in Steven Universe

Question #11) If you had to live in the world of one TV show or book series, which one?

I would want to live in the world of Steven Universe. It’s exciting and magical but everything turns out alright in the end.